Lilith is the one crying out in the night when our lives have become too politically correct, shouting: ‘NO! I am here, I am real, let me in’. 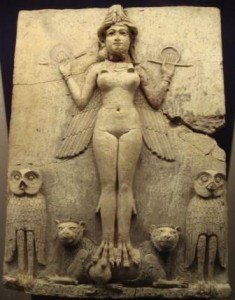 Lilith comes  uninvited. And we, do we hear her desperate attempts to wake us up from our selfcreated nightmare? Or do we interpret her callings as a curse? Lilith is the prototype of the uninvited Fairy Mother in Sleeping Beauty.  She says ‘This girl will die at the Spinning Wheel’. A curse, we are taught. I say it is a warning… ‘don’t get tied to the spinning wheel… stay wild, stay alive… free yourself from the spinning wheel, from the yoke of karma, or you are soul dead…’

Learn more about Lilith’s Wild Call and how it can change your life for the wild in my FREE global online seminar on 20 August 2014:

Recently Lilith has walked into astrology. Her presence is interpreted by some as a curse, by others as a chance. I feel her arrival is a blessing. Lilith’s presence goes beyond the personal, beyond the reading of horoscopes. Lilith is inviting astrology to ask herself serious questions and to adapt on a deep deep level to the New Times.

Lilith became known not as herself, but as the image given to her in a tasteless joke by her enemies. Lilith was a powerful  Sumerian Goddess, and I feel she was a shaman helper to Goddess  Inanna. In many stories Inanna has a female helper. Though in the translations she is referred to as ‘handmaiden’, these women perform heroic feats of devotion, awakening  and wild magic. In one of the myths she is called Lilith. My intuition is all these ‘handmaidens’ actually refer to this same Lilith, a powerful Keeper of the Magical and Initiatory Arts.

The Jews in around 1000 BCE were getting together a patriarchal theology, and needed to derail the power of the Goddesses. They ridiculed Lilith as the woman made by God alongside with Adam, who  refused to lie under him in sex. A cheap way of diminishing the wild power of this free spirited Goddess, Keeper of Magic and Initiation. Yes something of her essential nature can be found back in the joke. But her true nature and power reach that much further! 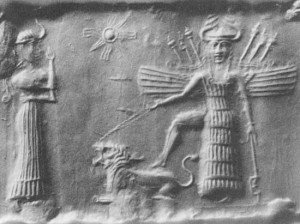 ♥ Inanna and another Goddess, possibly Lilith ♥

Now the story of how Lilith entered astrology tells a lot about Her- and about us. She entered the astrological scene a few decennia ago, as astrologers started to use computer based software to calculate birth charts. Up till then, everyone kind of approximated that the Moon moves in a circular orbit around the Earth. Not a bad first guess. Then if you knew the position of the Moon on the chart you knew all there was to know about the influence of the Moon. The Moon, symbol of emotions, soul, and woman, just dully circled around the Earth. Like for centuries people thought woman was just an appendix of man, dully circling her life around him. And, of course, lying under him in bed. Soul, they held, was just an appendix of body. * Sigh*

With more precise calculations being used nowadays, people started  becoming more aware that the orbit of the Moon is much more interesting than that! Not only does she circle round, she also approaches and distances herself from the Earth. This entered our awareness roughly at the same time that we started realizing that Woman has a life of her own. Woman can come and go as she chooses, she gained independency.  Soul, we know now, makes own choices,  independent of body. 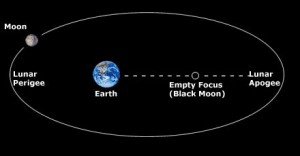 ♥ The Moon is modelled as describing an elliptical orbit. Focal points are the Earth and an empty spot called the Black Moon or Lilith ♥

In an attempt to describe these two motions of the Moon, people came up with an elliptical orbit for the Moon around the Earth. This is a gross simplification, but a step in the right direction. However, putting this in the circular charts was not easy. Should the charts be elliptical? But that would confuse all the orbits of the other planets. Someone thought up a great trick: on the astrological charts we give not only the position of the Moon, also of the second focal point of the ellipse. In the picture this is called the Black Moon. Together the positions of Moon and Black Moon give information on both the circular and the to and fro motions of the Moon.  A workable solution. Telling is the name that came up for this extra point: Lilith. 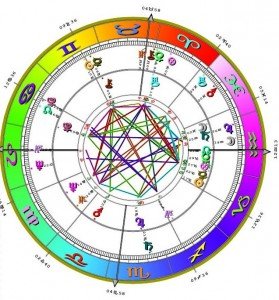 ♥ Astrology charts are round, putting us on the wrong foot as to visualizing actual movements in the sky ♥

So suddenly Lilith is back! Seemingly out of nothing she enters the charts, around the same time that the Sacred Feminine came back into our consciousness. For astrologers a new complication. This ‘new’ point in the horoscopes complicates the influence of the Moon. Not surprisingly therefor, she is by many interpreted as challenging the status quo. Sometimes even as revengeful.  Does that sound familiar? Something like challenging Adam in his secure position on top? These astrologers  do not see beyond the nasty joke.  They do not see Lilith.

Learn more about Lilith’s Wild Call and how it can change your life for the wild in my FREE global online seminar on 20 August:

Luckily, there are many astrologers who hold a more encompassing view of Lilith, seeing her as the voice of the collective feminine unconscious. Lilith as a deep wide knowing searching for a way to surface. Lilith as a deep wound on the feminine soul that asks to be seen and loved. A great step forward. Yet, in their minds she is a point, an empty point at that, outside of Earth or Moon. How tragically sad. Still Lilith is the uninvited Fairy Mother, for whom no place is reserved at the banquet. Her full power as Keeper of the Magical and Initiatory Arts is nowhere in sight.

♥ Earth and Moon cocreate a perpetual Dance. The actual dance is far less predictable and more exciting than this model ♥

The solution lies in looking beyond the models, to the actual truth. Let’s go back to the idea of the orbit of the Moon. In truth, this image is already off! The Moon does NOT orbit Earth. Take that in a moment. The Moon does NOT orbit the Earth.The actual truth is much more wild and much more interesting.  The Earth doesn’t stand still in this dance! While the Moon is orbiting around Her, Earth constantly feels her pull and push and Earth joins in the dance as a consequence!

The amazingly beautiful truth is, Earth and Moon are in perpetual cocreation. The movement of one influences the other and vice versa, in delicate and ever surprising ways.  Now this is stepping out of the box. This is stepping away from the spinning wheel to find your own dance. This is the dance Lilith is awakening us to. No longer is Adam’s position unmovable and should Lilith find ways to adapt. Far better than that, together they are in cocreation, creating new positions as they go. Lilith now has her power and position back and joyfully lets Adam share in her magic and initiates him into the deeper mysteries. Adam no longer needs to fight for his position and can hold Lilith in his strong arms as their love flows back and forth between them. This is the future that we know is waiting for us ♥ 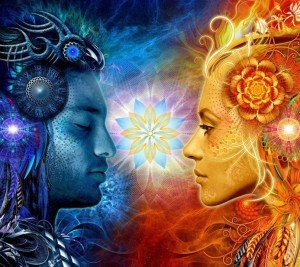 ♥ Lilith and Adam, Moon and Earth in a sacred dance ♥

Do you know that feeling when you are trying to stuff too much in your suitcase? I feel astrology just might be in that situation. Thanks to the new computer technology we are getting so much more info on the movement in the skies. The old fashioned way of visualizing the influences from the skies in circular astrological charts cannot hold it anymore. It’s bursting open like a too full suitcase. We can see Lilith and other new info as disturbances.  We can see Lilith as a message from the collective unconscious. Or we can go for a new suitcase altogether, one which allows for the beautiful dance of Earth and Moon, of Lilith and Adam. Then we can finally see Lilith as the Keeper of Magical and Initiatory Arts that she is. Then we can fully welcome back the archetype of the Keeper of Magical and Initiatory Arts in our world. Then we can be initiated and lead a magical life.

I feel Lilith will stand at every cradle, especially when a girl is born. She will speak the same words over and over: ‘You will die at the Spinning Wheel’. Until we understand that it is NOT a curse, it is a warning, and within the warning is the solution. Until we leave the spinning wheel and dance, dance dance.

What a happy thought to relate myself to such a dance!

Learn more about Lilith’s Wild Call and how it can change your life for good in my FREE global online seminar on 20 August 2014:

Starting time: 17.30 hr Amsterdam time (Middle Europe).
Living in US? We start 8.30am Pacific and 11.30am Eastern US.
Find your local time: use our super easy Time Zone Converter.
Duration 75 min.
Can’t make the time? Book, and you can download and listen later.

Upon booking, you will receive a confirmation email and soon after you will receive an email with login info and all other practical details. No special equipment is needed, simply a computer, laptop, tablet or phone with internet connection and speakers.

This website uses cookies to improve your experience while you navigate through the website. Out of these, the cookies that are categorized as necessary are stored on your browser as they are essential for the working of basic functionalities of the website. We also use third-party cookies that help us analyze and understand how you use this website. These cookies will be stored in your browser only with your consent. You also have the option to opt-out of these cookies. But opting out of some of these cookies may affect your browsing experience.
Necessary Always Enabled
Necessary cookies are absolutely essential for the website to function properly. This category only includes cookies that ensures basic functionalities and security features of the website. These cookies do not store any personal information.
Non-necessary
Any cookies that may not be particularly necessary for the website to function and is used specifically to collect user personal data via analytics, ads, other embedded contents are termed as non-necessary cookies. It is mandatory to procure user consent prior to running these cookies on your website.
SAVE & ACCEPT